The Beaver Valley Choral Society, as a musical ensemble, believes……

OUR SECOND CENTURY OF SONG

EMBRACING OUR PAST-ENVISIONING OUR FUTURE

As we celebrate our Diamond Jubilee, we look back on our first 100 years, recognizing the rich history that has brought us to today, as we move together into our Second Century of Song.

Wednesday, October 24, 1923, marks the first mention of a community choir in the Beaver Daily Times. The Choral Society gave its initial performance at Beaver College, Beaver, PA. On the previous evening, October 23, the Director was Beaver College music professor T. Earle Yearsley. Mention is made in an article of the day for a planned spring performance of Handel’s Messiah, which indeed the BVCS did perform for many years during the 1940’s under the direction of Dominic Mundo.

The late Phil Inman undertook the baton in 1979 skillfully leading the Choral Society for 32 years, retiring in 2011. Upon his retirement, Inman was named Director Emeritus. Mr. Inman, working tirelessly, uniquely developed the Choral Society as a premiere performing ensemble. Befittingly, an annual collegiate scholarship, founded in his name, honor his enduring legacy in the musical arts. The Philip H. Inman Excellence in Choral Conducting Arts Scholarship, in its twenty-third year, is awarded to a student at one of fie regional universities. Scholarship recipients have honored Mr. Inman’s legacy by achieving success in their field through achieving doctoral degrees and many can be found successfully achieving and serving in academic and religious institutions throughout the nation. Mr. Inman’s legacy wish said to all was to “Keep the Society Singing”

Answering the call to serve and keep the Choral Society singing, Raymond J. Rotuna became the Artistic Director in 2011. With the help of member volunteers, membership grew to new levels, and in response by the full ensemble, the challenge to expand repertoire experiences and artistic levels was achieved. Attentions were focused and result realized on increasing the ensemble’s awareness beyond its local boundaries. Ray established the BVCS Orchestra, enlarged the music library, co-created the Summer Music academy and the Annual Carol Sing, and co-authored the Coral Society’s first-ever Strategic Plan on 2013. The Solo Series and the Chancel Choir programs are bound to his legacy in having distinguished the Choral Society further for its differentiation and success in musical arts and service to the community. Upon his retirement, Ray was named Director Emeritus in 2021 and was further recognized by having our music library inscribed as the BVCS Raymond J. Rotuna Music Library.

Current Artistic Director Sharon Burchill was appointed beginning in the 2021-2022 concert season. While serving as Associate Conductor from 2012-2021, Sharon founded and directed the Treble Youth Chorale, helped to launch the annual SummerSing! Program, and assisted in navigating the BVCS through our Virtual Season in 202202-201, to keep our members engaged and singing by inviting world-class authorities on choral music, vocal training, recording, and related musical arts activities to present member interest session during Zoom meeting gatherings. Not even a pandemic could keep the BVS down! In true pioneering fashion, we forged new paths with innovative programming and exciting ventures into the virtual world, culminating in the successful launch of two Virtual Ensemble recordings.

Expanding experiences for the Choral Society will remain a key focus for the future. Opportunities such as our Choral Connections Program has led to successful partnership experiences with Coro Latinoamericano di Pittsburgh and the Novus Children’s Choir of Pittsburgh. In conjunction with the Summer Academy, a successful relationship has been formed with the Pittsburgh Opera Educational Program. Of the most recent additions to our educational programming, a Choral Conducting Scholar Program was endorsed and we launched our first student assistant in support of our adult ensembles.

The future of the Beaver Valley Choral Society will continue tour commitment to excellence. Our hall mark never waivers: we are committed to excellence in all that we do. Our musical artists share this excellence on the concert stage, in outreach to the community, and as ambassadors in the schools, bringing our music and our message throughout Western Pennsylvania and beyond.

ABOUT THE BEAVER VALLEY CHORAL SOCIETY 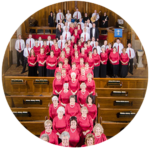 Celebrating its 100th Anniversary, the Beaver Valley Choral Society continues its legacy as a Christian Faith-Based, non-denominational, inter-generational choral and orchestral arts organization presenting vibrant concerts throughout western Pennsylvania. The Beaver Valley Choral Society Adult Principal Choir, Chancel Choir, and the Treble Youth Chorale are currently the three choral ensembles comprising the Community of Choruses dedicated to inspire, educate, and enrich their members and the audiences they reach. Each chorus strives for performances of the highest musical standards while focusing on the compelling spirituality of their musical repertoire. Recognized for its excellence, the Society supports music education and community outreach through partnerships in a Summer Music Academy and an annual Christmas Carol Sing.

The Adult Principal Choir, of one hundred members, continues the historic tradition of oﬀering any adult 18 years and up, who can sing tunefully, the opportunity to participate as a member without prior audition. In the past six years, Society Singers and Orchestra have featured works by Dan Forrest, John Rutter, Gustav Holst, Pepper Choplin, Natalie Sleeth, Ennio Morricone, Valentin Schumann, Ola Gjeilo, Via Olantunji, John Purifoy, Joseph Martin, Donald Fraser, Felix Mendelssohn and George Frideric Handel. 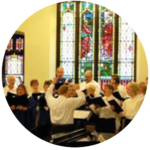 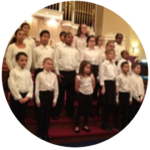 The Beaver Valley Choral Society Orchestra gave its inaugural performance during the 2012 – 2013 concert season under the batons of the BVCS Artistic Directors. The Orchestra performs with the Choral Society as supportive enhancement and as a solo ensemble. The programs of the season can feature large or small orchestral ensembles.

New in 2022, the Choral Conducting Scholar is another program in support of collegiate musicians. This position is designed to provide a hands-on learning experience for aspiring choral conductors. Through mentorship with the Artistic Director and podium time with the Adult Principal Choir in sectionals, rehearsals, and concerts, the Choral Conducting Scholar will build conﬁdence and expertise while cultivating their skills and technique. Applications open the summer preceding the new concert season, with the position held for one year, with possibility of renewal and advancement.

The Beaver Valley Choral Society Community of Choruses and Orchestra are recognized as the Valley’s largest community choral with orchestral performing arts organization of its kind, presenting vibrant concerts.

For detailed information on membership in any of the choral or orchestral programs, you can contact us usng our link Beaver Valley Choral Society, or by calling Judi Contino, Membership Coordinator, at 724-843-7681.

For information on the chancel choir program, placing an ad in the BVCS seasonal program booklet, how to become a corporate sponsor, the scholarship programs, the benefactor program, or how to request an on-site church or other venue performance, please write with specifics to:   Beaver Valley Choral Society, PO Box 1628 Beaver Falls, PA 15010 or through bvchoralsociety@gmail.com

The Beaver Valley Choral Society is a 501 (c) 3 not-for-profit organization.

Founded 100 years ago in western PA, the Beaver Valley Choral Society is a Christian-faith based, non-denominational, intergenerational choral and orchestral arts organization.  Providing singing and playing opportunities, the BVCS has something to offer all age groups. 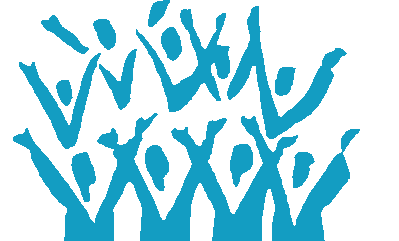